Thomas was born in 1810 in Dumfries, Scotland. It is unclear who his parents were. Perhaps John Carruthers and Mary Bell. However, on Familysearch, a Thomas who was supposedly the son of the above is shown with a different wife and many children. At this time (June 2019), Thomas’s origins haven’t been resolved.

However, there is a Scottish marriage record showing Thomas marrying Agnes Granger or Grainger in Dumfries, Dumfries, Scotland on April 10, 1831. The family journeyed from Liverpool to New York on “The Globe.” Thomas’s occupation was “bookbinder.” The young family with a pregnant Agnes arrived in New York on June 5, 1832. Their first child Jenette was born immediately. Their second child Eleanor was born in 1834 in Petersburg, Virginia. No one seems to have any idea of why they ended up there. Perhaps they were visiting other relatives?

The obituary of daughter Jenetta says that “In 1836 her father’s family removed to Ohio….” The Carruthers’ third daughter Sarah was born in 1844 in Chillocothe, Ohio. One wonders how much occupation there was for a bookbinder in the new world. Nevertheless, in 1850 Chillocothe, “bookbinder” is Thomas’s occupation on the census. Chillocothe is also where two more children were born to the family. Then Agnes passed away in 1852. She was originally buried at the First Presbyterian Graveyard which was relocated to Greenlawn Cemetery, Chillicothe, Ross, Ohio.

In 1853 Thomas married Elvira McCune, daughter of Samuel McCune and Rachel Sexton, in Ross County, Ohio. (Ten years later, Elvira’s sister, Mary Jane McCune married the widower Thomas Wilson who was from Garden Plain and came to live in Whiteside). Thomas and Elvira had a daughter Mary who was born in Chillicothe in 1854.

Around 1856 the family had moved to Whiteside, Illinois. The obituary of daughter Sarah said the family moved to Illinois when she was 12 years old. The obituary of daughter Elizabeth says her parents “bought a farm on Stone street near the Stone street school about two miles from Garden Plain.” Thomas was close to 50 years old and now a farmer. What did he know of the farming business? Did he do some farming while he was a bookbinder or was he a complete novice? It must have been helpful that he had his future son-in-law James Burnett living with him who had been raised on a farm. James was to marry Sarah Francis Carruthers in 1862 and the families continued to live close to each other.

Unfortunately Elvira died in 1867. Once again Thomas needed a wife and he returned to Ohio to marry Sarah J. Wallace. More questions! Had Thomas known Sarah before he moved to Whiteside? Why didn’t he just marry one of the many local spinsters? Looking at Sarah’s background, it seems her family had lived in Ross County, Ohio, so that probably is where Thomas and Sarah had made their acquaintance. Sarah is buried with her parents and siblings at the Old Burying Ground, Greenfield, Highland County, Ohio. Her gravestone clearly says”Wife of Thomas B. Carruthers.” That initial “B” could possibly be helpful someday in identifying Thomas in Scottish records. Thomas died in 1883 and Sarah died in 1904. Thomas is buried at the Garden Plain Cemetery in Whiteside, Illinois, where Elvira is also buried. 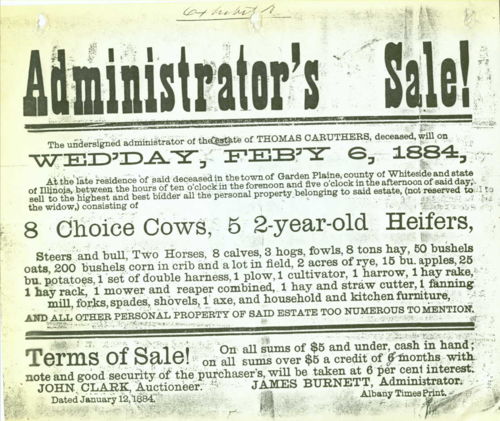 John was born in 1846. He was the son of Thomas Carruthers and Agnes Granger. John married a Pennsylvania woman, Emily J. Blean, daughter of David Blean and Emily Kinkaide who likely was visiting relatives in Whiteside, Illinois, when he met his future wife. John passed away in 1920.

John’s interesting middle name might be a clue to the family’s Scottish ancestors. Perhaps the maiden name of someone’s mother?

(N.B. A granddaughter of John’s sister Frances (Elizabeth Burnett) was to marry another Blean (Leonard W.) in 1912.

John W. Carruthers, son of Thomas and Agnes Carruthers, was born in Chillocothe, Ohio, October 14, 1846. When seven years of age he, with his family, moved to a farm near Garden Plains, Illinois, where the greater part of his early life was spent. While residing on this farm he united with the Presbyterian church, at the age of 21. He was married to Emily J. Blean, September 13, 1885 and the following year he left Illinois and moved to Turney, Missouri, where he resided for several years, afaterward moving on a farm near Lathrop, Missouri, at which time he united with the Presbyterian church in Lathrop, of which he was a faithful member and a ruling elder until the day of his death.

Mr. Carruthers has left to mourn his death, four sisters. His wife taken from him a little more than a year ago, and from that time on his life was a lonely one, and his home desolate.

Will of John W. Carruthers

The will of the late John W. Carruthers of Lathrop was filed in probate court this week. The will leaves all the estate to his wife but as she had died before her husband the property will go to his brothers and sisters. 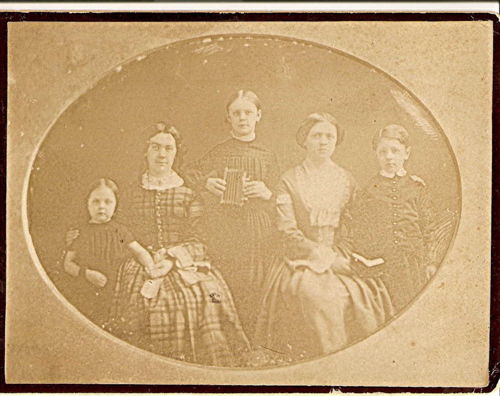