Stuart Carruthers was born on October 11, 1870, in Finch, Ontario.  His father Andrew William Carruthers was 54 and his mother the former Jean Steven was 37. He was 6th born in a family of eight which included my great grandmother Margaret.  Stuart can be found on the 1871, 1881 and 1891 census of Canada living with his family in the Winchester sub-district of Dundas County. His first name was written “Stewart” on some of them as it is in some of the later documents as well.   He married Jane Smirl who had been born in nearby Hallville in 1872 on December 20, 1893, in Russell, Ontario.  The unidentified picture below was among my Grandma’s and I think it looks like some of the Carruthers.  The style of clothes and the type of picture would be about right for 1893 but if anyone can confirm or deny my guess, please do!  My Grandpa Frank Kinnaird lived with Stuart and Jane after the death of his mother in 1894 so it would make sense that he had a picture of them.  The 1901 Canadian Census shows Stuart, Jane, 3 sons, 7 year old Frank Kinnaird and  John O’Neil living at Concession 11 Lot 23 Cannamore, Ontario.  Google maps names a Carruthers Road which intersects with a Stevens Road near this place today!  Five years later J.J. O’Neil would be married to Stuart’s sister Christina and they would be living in Manitoba with Frank, starting a new life on the prairies!

I received your card and we are all well we have pretty good sleighing now I have just tried my promotion examinations.  James Evans is working here now.  He came a few days ago.
Write soon.
Orne

(Postmarked October 1907)
Dear Cousin,
I thought I would write you a few lines we are all well we are through picking potatoes I suppose you’s are all through harvesting.
Write soon.
Orne
Orrin married Beulah Jessie Ford in 1919 and they had 5 children.  Sadly two boys died in WWII

Keith Carruthers and Amy Marcellus Loughridge married in 1918
The other Carruthers brothers sent postcard as well. 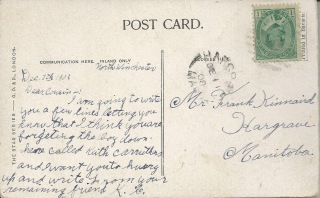 North Winchester December 7, 1908
Dear Cousin,
I am going to write you a few lines letting you know I think you are forgetting the boy down here called Keith Carruthers and I want you to hurry up and write.
From your remaining friend,
K.C.(Keith Carruthers)

I thought I would drop you a card to let you know we are all well. Hoping you’s are the same. Are you going to school now? I am.
John Carruthers

I am just sending you this card to let you know there is such a person as Carl Carruthers down here and I want you to write me as well as the other boys. I am (?) big boy now and can read and write too.
from Carl
Stuart Carruthers died young on January 12, 1917, in Morewood, Ontario, at the age of 46.  Tragically, his wife Jane died a short 11 months later on November 3, 1917 at the age of 45.  They are buried in Morewood Presbyterian Cemetery with his parents and sister Margaret.