“Canonbie Churchyard, on the north or left bank of the Esk, is one of the largest parish burying grounds in Scotland, and is kept in such good order as to be an example to many others. A few years ago my worthy friend the present minister wisely made arrangements for gathering together the fallen gravestones. A large number then lay about in all directions, many of them of great age. They were collected and placed side by side against the western wall, where they now rest, one hundred and forty-nine in number, and others which lay prone were raised to the perpendicular in their original positions.

”These ancient gravestones, even at the present time, are looked upon by some as objects of mere commercial utility. Not so long ago, a horse and cart being observed in this graveyard at an early hour, inquiry was made of the man in charge as to his object in being there. A woman who accompanied him offered the explanation that the front door-step of her cottage having been worn down, to remedy the defect she had come to take away her grannies tombstone; which intention was duly carried into effect. 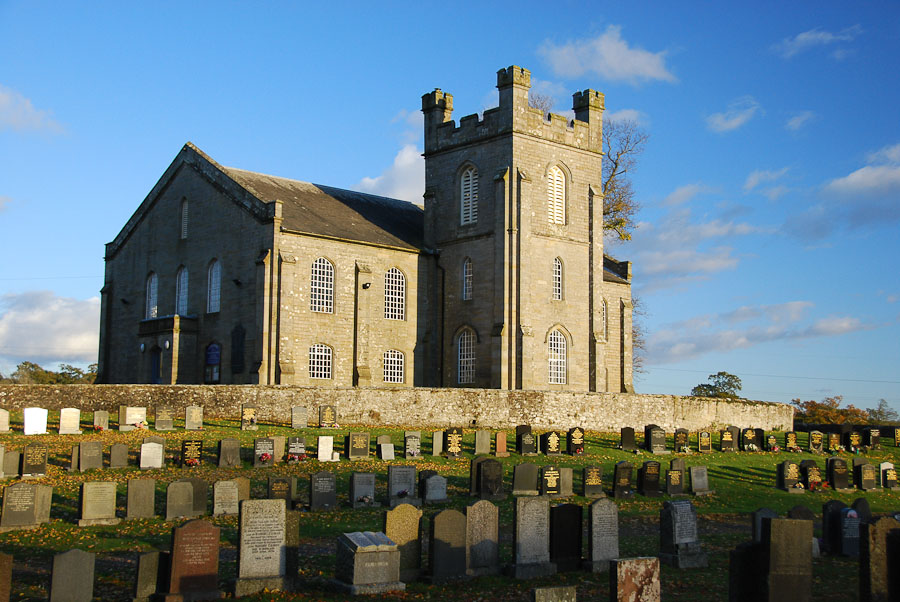 ”The Parish Church is surrounded by a large wall, surrounded by flat cope-stones, some of which had been displaced by cattle in the adjacent field. It was found on examination that, smooth on the upper side, some bore inscriptions on their under faces. Possibly the entire coping of the wall which encircles the church and measures 200 yards or more in length, is composed of old gravestones.”

CANOBIE, or CANONBIE, a parish, in the county of Dumfries, 6 miles (N.) from Longtown. An ancient priory here is supposed to have given the name to this place, Canobie being probably derived from the Saxon Bie, or By, signifying “a station,” and thus interpreting the word “the residence of the canons.” The church is an elegant sandstone building with a tower, erected in 1822 and contains sittings for upwards of 1000 persons.

History—
This congregation was formed at the Disruption, but the Duke of Beccleuch, sole proprietor of the parish, at first absolutely refused a site for a place of worship. From 1843 until 1844 the congregation met for worship on the public highway. The charge was sanctioned in December 1843. The Duke finally relented, and the church was completed in 1851. Great influence was exercised to prevent the inhabitants of the parish from associating themselves with the Free Church, but in spite of this the cause enjoyed much popular goodwill. Membership declined with the decrease in population.
Membership: 1848, 240; 1900, 171.
Source: Annals of the Free Church of Scotland, 1843–1900, ed. Rev. William Ewing, D.D., 2 vols. pub. 1914. Film #918572. More details are given in the source.)

Below is a video made on this church.