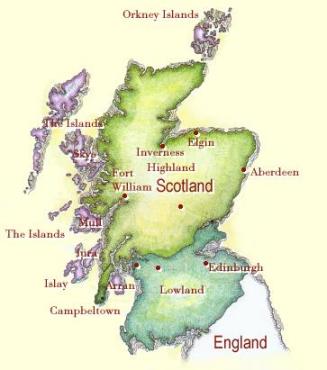 The Scottish Lowlands are made up of the southern portion of Scotland, the central region, the eastern coast, and most of the northeastern coast. The bulk of Scotland’s population (about 80 percent) lives in the Lowlands, particularly in the urban and industrial areas around such major cities as Glasgow and Aberdeen, as well as in the capital city of Edinburgh. Taken as a whole, the Lowlands comprise some 48,648 square kilometers in land area and have a population in excess of 5 million. The climate is generally cool and wet, but there is variation across the region. There are few thunderstorms and little fog. Days are long in summer, short in winter.

Unlike that of the Highlanders, the language of Lowland Scots is not Gaelic but is rather a variant form of English introduced by Germanic settlers in the region as early as the sixth century a.d. The distinctiveness of what is now called “Scots” or Northern English, which was once called “Inglis,” is great enough to merit its treatment as a language in its own right, rather than simply a dialect of the official or Standard English of southern Britain. Scots is a language with a long literary tradition, dating back to the 1300’s. In the early 1700’s English was made the official language, at least with regards to administration, for all of Britain, and Scots suffered a loss of prestige for a time. However, the linguistic tradition remained strong, borne in ballads, verse, and folk songs and preserved in the mid-seventeenth-century poetry of Robert Burns, perhaps the most famous of writers associated with the tongue.

The Romans arrived in the Scottish Lowlands in a.d. 80 but left few traces of their stay. During the period known as the Dark Ages, four groups emerged in Scotland: the Picts in the north; the Scots (of Irish origin) in the west; the Britons, who were related to the Welsh, in the southwest; and the Angles in the southeast. Linguistically, these groups were distinct from one another: the linguistic tradition of the Angles derived from Low German and Saxon English, the Scots and Britons spoke Gaelic, and the Picts possessed a language of their own. The formation of a unitary nation out of these disparate groups came about as a result of external pressures and the slow growth of Christianity in the region.

The first Scottish king, formally recognized, was Malcolm II (1005-1034), who inherited control of the southwestern portion of Scottish territory and won lands to the southeast through conflicts with England. But through the eleventh and twelfth centuries, ruler ship was frequently disputed among local leaders, and individual petty kings often sought English alliances to strengthen their causes. By the late thirteenth century, this state of affairs had resulted in increasing English control over the region. King Edward I of England arbitrated among claimants to the Scottish throne and installed John Balliol in that position for a time—though he was later to depose Balliol and assume personal control in 1296. The Treaty of Northhampton, in 1328, confirmed Scottish nationhood.

At about this time the house of Stuart arose, from which line came a succession of Scotland’s leadership, nearly ending with Catholic Mary Stuart, who was beheaded in 1587. Her son became James I of England and James VI of Scotland. The last reigning Stuart was James II of England (James VII of Scotland), who was forced to abdicate in 1688, largely because the predominantly Protestant Scots rejected his devout Catholicism.

The year 1707 brought about the formal Act of Union with England, linking the political entities of Scotland and England. While the political fortunes of the two nations have remained joined one to another since that time, the strong sense of a specifically Scottish national identity has never been erased, and to this day there are strong movements aimed at establishing Scottish independence.

The Lowlands consist of both rural and urban, agricultural and industrial, areas. Within the Lowlands, regional differentiation is marked in part by divergent economic practice. Although the county of Lothian, for example, is predominantly industrial, East Lothian is known as “corn country” and possesses some of the most prosperous farms of the region, while the Borders are associated with sheep husbandry. Glasgow is the industrial heart of the region, with its economy centered on the busy Clyde docks. It is thus difficult to describe some overall Lowland Scots culture, tradition, or economy. Once known for having higher wages and greater economic opportunities than the rest of Great Britain, the area has suffered something of a decline since the middle of this century, and unemployment has led to significant out-migration. Its traditional industries include shipbuilding and coal mining, both of which have grown less prosperous in recent years. Newer industries include electronics. Women working outside the home can be found today in all fields, but in the past they were associated largely with the textile industries and domestic work. In agricultural regions, a greater division of labor by gender was to be found, with women traditionally occupied in hand weeding and reaping with the sickle; culturally they were prescribed from working with horses. In the Scottish Lowlands, as elsewhere in industrialized regions, there is a marked difference in wage levels for men and women, with women often earning substantially less than their male counterparts.

Scotland as a whole has long honored the idea of education and equal access thereto. Public education, once controlled by the churches, came more and more under the control of the state during the nineteenth century. Higher education is highly valued, and the universities of St. Andrews, Edinburgh, and Glasgow are of world renown. It was not until the last decade of the nineteenth century that women were legally granted full-status access to university-level education.

Religious affiliation in Lowlands Scotland is pluralistic, and sissenting churches have included the Secession, Relief, Episcopal, and Roman Catholic churches. The Free Church of Scotland was created in the mid-1800s, and the Catholic church underwent a significant increase during roughly the same period, largely as a result of a major influx of Irish immigrants who fled to Scotland to escape the Irish potato famine. Also during this period, the Secession and Relief churches, which had formed in rebellion against the control of the Crown over the established Church of Scotland, were merged to form the United Presbyterian church. Church affiliation is to some degree linked to socioeconomic position in the Lowlands, with tradespeople predominating within the United Presbyterian church, the “landed gentry” associated most strongly with Episcopalianism, and rural laborers largely belonging to the Church of Scotland. Church influence in daily life was and remains strongest in rural areas as compared to urban ones.

The contribution of Scots to literature and the arts is immense. Lowlanders of world renown include R. L. Stevenson, Walter Scott, A. Conan Doyle, J. M. Barrie, David Hume, and Adam Smith. The Borders are famed as the heartland of minstrels and were the home of Walter Scott. Thomas Carlyle was born in the rural southwest. Burns wrote of the rich agricultural world of East Lothian.