Background of the situation;

For several centuries, there lay between the kingdoms of England and Scotland a stretch of ground known as the Debatable Lands.  These lands came to be occupied by what were known as “broken men”.  These men were originally of good family, but owing to various circumstances, had become little beyond common thieves.

The border area had been divided, on both sides, into three marches, with a subset for that area on the southwest side called the “Debatable Lands”, because both England and Scotland claimed it. In 1552, the decision was mutually made to put up an earthen barrier, the so-called “Scots Dike”, to split it. The northern part, Canonbie, was added to Scotland and the southern part, Kirkandrews, became a part of England.

The border area had been divided, on both sides, into three marches, with a subset for that area on the southwest side called the “Debatable Lands”, because both England and Scotland claimed it. In 1552, the decision was mutually made to put up an earthen barrier, the so-called “Scots Dike”, to split it.

Unlike Hadrian’s Wall, farther to the south, with its system of walls and towers and gates and little forts and big army camps, this was never an elaborate military structure, or even like Offa’s Dike between England and Wales, but simply a boundary marker in low-lying land (and only 3.5 miles long– 5.6km).

In this wild world, there are no long walls, of stone, wood, or earth to protect anyone, but castles, towers, and fortified farmhouses called bastles (possibly from the same root as “Bastille”?). Here we see Hermitage Castle, Smailholm Tower, and Black Middens Bastle.

Although we see these now as gaunt ruins, we should always imagine them—as in this reconstruction of Smailholm—as living spaces, as well as refuges in an often lawless land.

One has only to see the thick walls of a bastle and, originally, no door at ground level (stairs appear to be a later convenience for a more peaceable time), to imagine the danger from reivers, raiders from either side of the Anglo-Scots border and sometimes, as there was a certain amount of intermarriage, from both.

As can be seen in this reconstruction, these walls might be all that would stand between the inhabitants and destitution or even death, should the reivers come raiding.

There was also the possibility of buying them off, by paying them blackmail, a word whose origin is contested, but whose purpose is clear: protection money. If you paid them, in coin or cattle, you were safe—at least until the price went up.

Curbing such behavior was the job of the Border Wardens, there being six, one for each March on each side of the border. Theirs was a difficult job: too much territory, too few men, and too few resources to back them up. Wonderfully, one of these Wardens, Robert Carey, has left us a memoir, which is available on-line:  memoirsrobertca00orregoog.

If you were attacked and you survived, you might send word to the Warden or one of his officers, who could organize a posse to pursue the raiders. By law, all able-bodied locals were supposed to turn out to help when the organizer—Warden or officer—rode by with trumpeter and a rider who carried a flaming bit of peat on his “staff” (local word for “lance”).

This was called the “hot trod” and, under its conditions, the pursuers were allowed to cross the border. Such occasions could be very dangerous, however, as those raiders would be chased back across their own territory, giving them the chance to delay or destroy those in pursuit in an ambush on familiar ground.

Much of the blame for over 300 years of Border raiding goes to King Edward I of England (reigning 1272-1307).  Edward decided to interfere in Scottish affairs when Alexander III of Scotland died and Margaret, the Maid of Norway, became the heir to the Scottish throne.  Edward chose of acquire Scotland by peaceful means by marrying his young son Prince Edward to the Maid.  After Margaret died on the way to Scotland, the throne was left open to 13 competitors and Edward I resorted to less peaceful means.  The result was the War of Scottish Independence, ending with King Robert the Bruce sitting on the newly independent Scottish throne.

People living on the Border were the victims of these circumstances.  The passing back and forth of armies, both English and Scottish, made tilling the ground and agricultural pursuits useless.  There was no point in sowing crops that would be burnt down or trampled before the harvest.  Therefore, cattle became their principal property, but it was always liable to be stolen.  If their cattle were stolen, the people had to survive somehow, so they stole cattle back.  Robbing thus appeared to be fair reprisal.  However, under Border Laws, the pursuing of raiders into their own country was appropriate and often led to skirmishes and bloodshed.  What we now look at as common thieving, became the normal mode of subsistence, considered honorable and lawful.  This continued on both sides, even after there was peace between the two countries.

In order to better “police” the Border, and to ensure grievances were settled, both sides of the Border were divided into territories known as the Marches.  On each side of the the Border there was established a West March, an East March and the Middle March.

It was the Scottish West March that involved the Carruthers family.

This West March was comprised of Nithsdale, Annandale, Eskdale, Ewesdale, and Wauchopedale (which was the Stewartry of Annandale and the Sheriffdom of Dumfries).  Caerlaverock, Lochmaben, Annan, and Threave were the most important strongholds, with Lochmaben being identified as a “Royal Castle”.  The Warden, the Deputy, and the Sheriff were stationed at Dumfries.  The Deputy was charged with the defense of Scotland from England.  A Captain, who was known as the Keeper of Annandale, was stationed at Langholm.  The rest of the wardenry was defended by the various families who lived in the Border area. 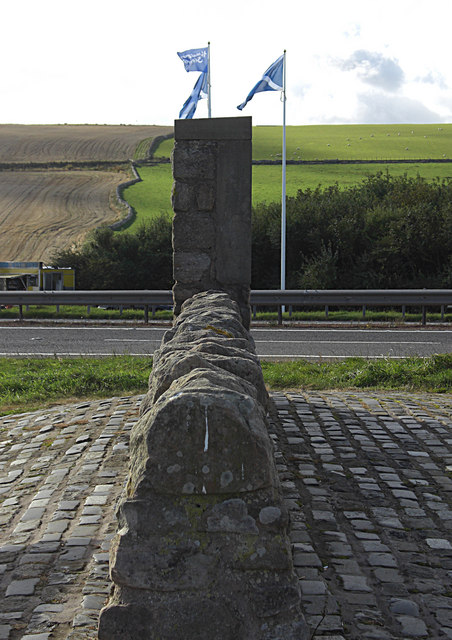 The Warden had great powers and appointed deputies, clerks, sergeants and dempster’s.  The castles of Lochmaben, Langholm, Annan, and Threave were in his charge and he could call out the full armed force of the wardenry for the invasion of England.  He had power to make truces with the English Warden and, in peacetime, one of his chief duties was to meet on certain days for the settling of disputes and granting compensation for crimes committed.  He could hold Justice Courts for the trial of Scottish subjects under his jurisdiction and could compel the attendance of nobles, barons, and landed gentry who were bound to present before him their tenants and servants when their names came before the court.  Unruly Borderers could face action from the Warden’s Lieutenant, who could use sword and fire to demolish their houses and castles.

The penalty  for wounding a person of the opposite realm was estimated by a jury, consisting of 6 Englishmen and 6 Scotsmen, named by their respective Wardens – and was then doubled.  If the person committed the crime of “burning or spoyling of goods”, they had to pay back the value of the goods, plus twice the value as penalty.  Convicted murderers, were executed by the opposite Warden and his property sold to pay to the heir of the deceased.  In 1563, it was agreed that an offender proved guilty on three occasions of stealing, should be executed.

Deadly feuds were occasionally stopped by the Warden arresting the persons at the feud and delivering them to the opposite warden.  This worked for smaller families, but not for the feuds involving the larger clans such as the Scotts, Elliotts, Maxwells, Armstrongs or Johnstones.