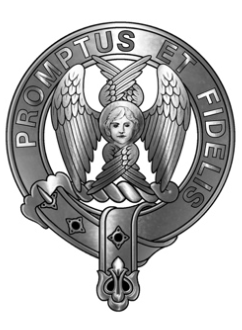 Here are some basics on the Border Reiver Clan and Family of Carruthers.

The official clan Society is the CCS-I (Clan Carruthers Society – International), which is the only organisation authorised by our Chief to represent our Name world-wide. The CCS-I has branches throughout the world which are led by Regional Commissioners appointed by our Chief. The regions to date are: Africa, Australia and Oceania, Canada, Europe, UK/Scotland, and the USA.

Therefore Membership of our organisation is open to any and all Carruthers or derivation of our name, wherever, you are from i.e. you don’t have to be Scots or have land here to join, and you are more than welcome to join and support Clan Carruthers Society-International amnd the work we do on your behalf.

Our site itself is full of evidenced based information to help you enjoy your personal journey.

Here is the link to the  achievements and successes of the the Society, from pre 2007 to December 2020.

Where do we come from

According to Scottish historians, Carruthers is a topographical name (ie named after a region or area of land where a Briton fort once sat. The fort was called Caer – Rydderch (Fort of Ruthers) in the ancient Brythonic language, and the area around it became the ancient parish of Carruthers in Annandale, Dumfriesshire, South-west Scotland.

Progressively, Scottish surnames became vogue in the upper echelon of Scottish society, in the Scottish lowlands and borders in and around around the 12th century.  This was heavily influenced by the Normans, who were invited into the  country by David I,  use of them. Those who owned the land initially became ‘of’ Carruthers mirroring such as ‘de’ Brus (Bruce) while those who worked or lived on it becoming known as ‘in’ Carruthers. This progressed to simply being Carruthers as the surname became much more frequently used by lairds, tenants and workers alike to define who they were. 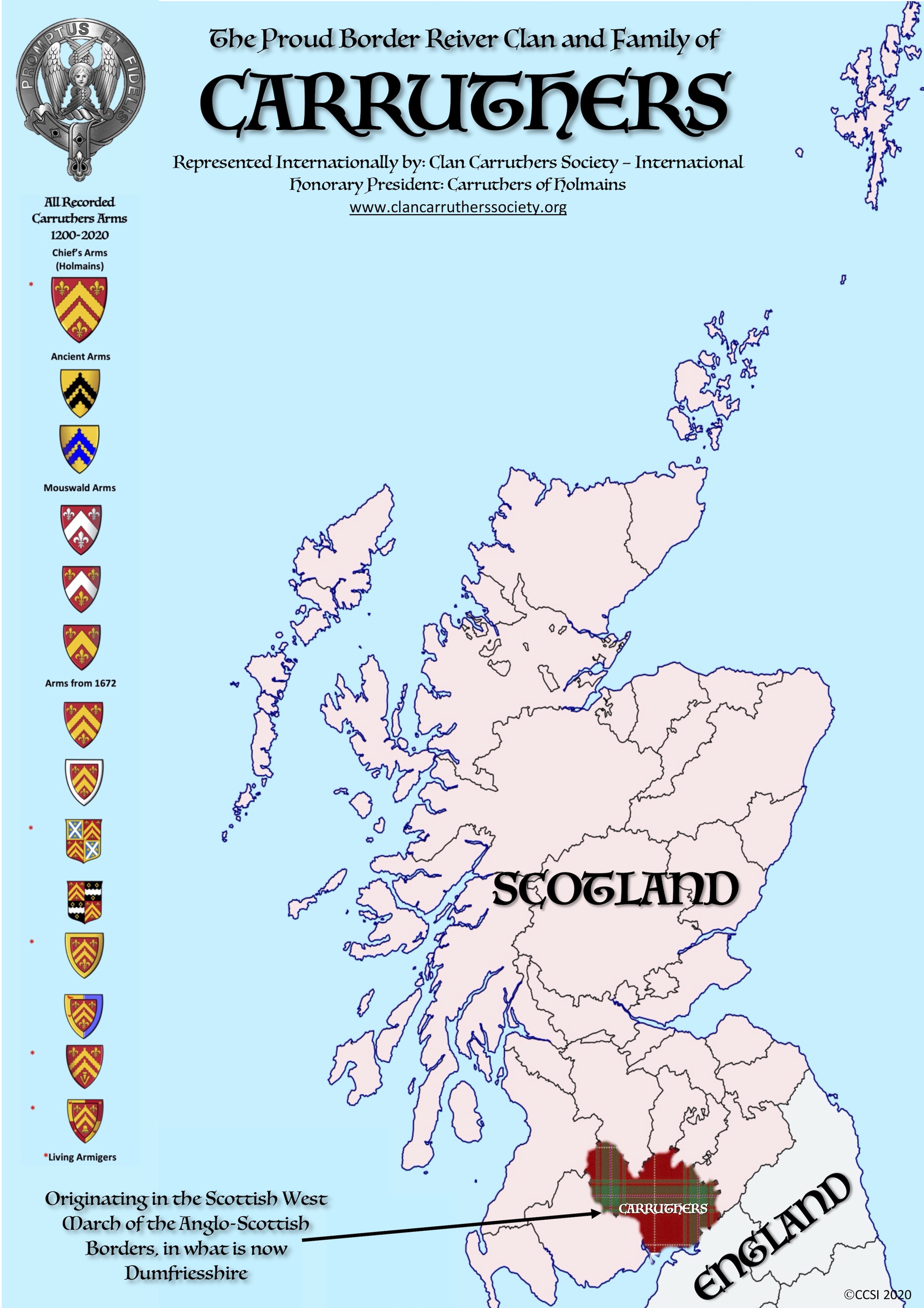 Carruthers Chiefs Arms – at a glance

Supporters: Two Fallow deer bucks rampant on a compartment of heathland strewn with Gorse in bloom.

Origin of Name: Topographical – from the Brythonic, Caer Rydderch –fort of Rydderch (Ruthers in the Cumbric dialect))

This of course brings Carruthers from armigerous status i.e. no chief, to official recognition as a clan/ family and a ‘Noble Incorporation’ in Scots law. 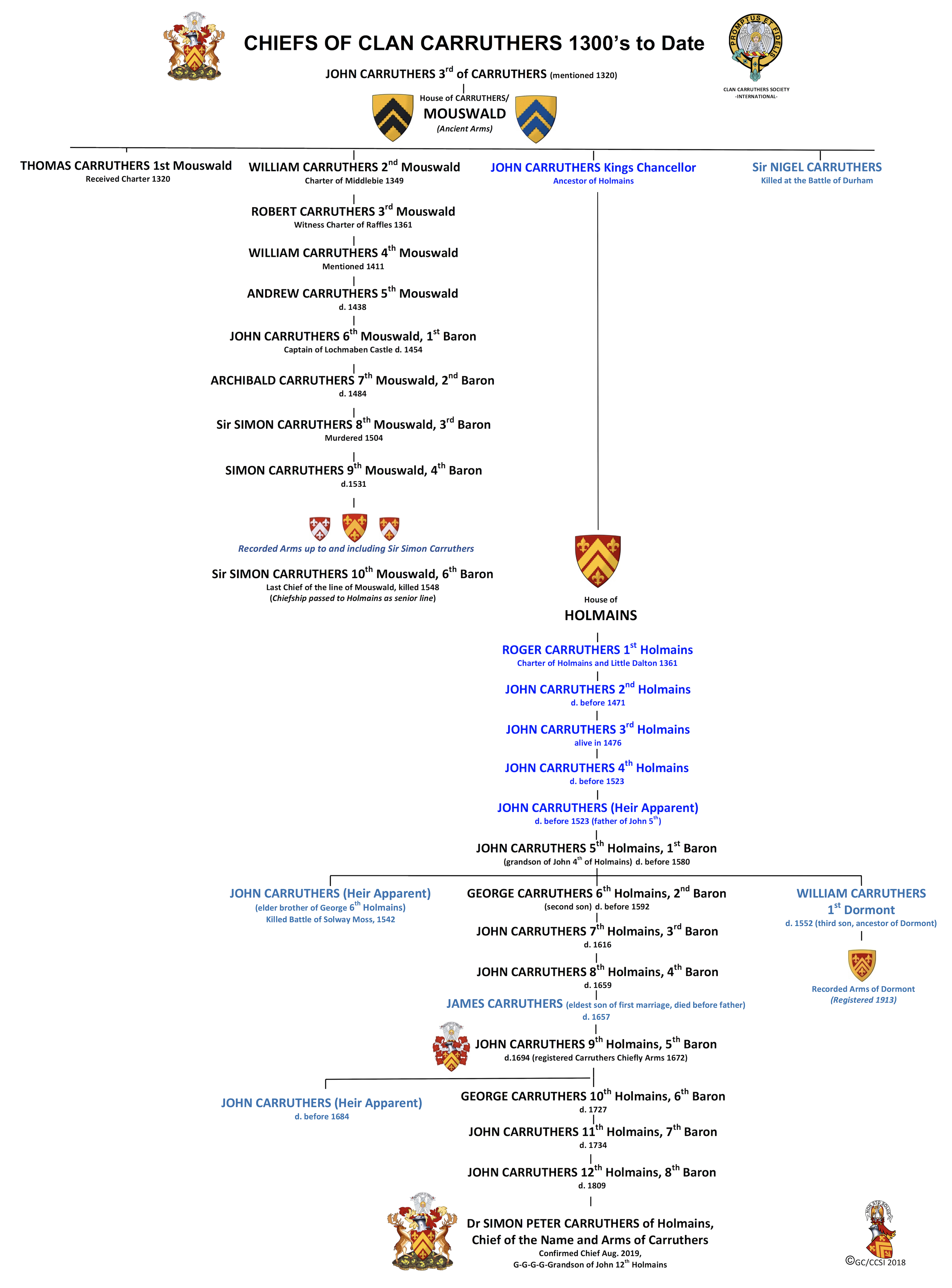 The recognised chiefly line of the clan and family of Carruthers is seen as beginning in 1320 with Thomas Carruthers, 1st of the House of Mouswald.  Thomas received his charter from Robert the Bruce for services rendered, although there is evidence of at least three generations of Carruthers owning the land of Carruthers prior to this and dating back to the early 1200’s.

The first recorded use of our name was Willian de Carruthers who gave a donation to Newbattle Abbey in the reign of Alexander II (1214-1249). The ‘de’ was from the Norman influence of the time and means; the owner of the land of Carruthers. He is presumed to have been the grandfather of John Carruthers, father of Thomas, 1st of Mouswald.

The House of Mouswald existed for 228 years, growing in land and reputation. It became a barony under John 6th of Mouswald, 1st Baron (d. 1554) but the became extinct in 1548 after the death of Simon 10th of Mouswald, 6th Baron.  Simon was killed during a border raid which, along with other Lairds,  while attempting to clean up the debateble lands at the behest of the Crown.  On its extimction, the chiefly line was passed to the next senior house, that of Holmains and John Carruthers, 5th of that line.

Holmains as a house were descended from John Carruthers (Kings Chancellor), Thomas’s second brother.  Roger Carruthers, presumed to be John’s son, added to these lands through a further charter in 1361. Holmains, like Mouswald grew in size and importance and also became a barony but not until John 5th of Holmains, 1st Baron (d 1580).

It was John Carruthers 9th of Holmains, 5th Baron who in 1672 after the Lyons Act, registered the chiefy arms with the seraphim crest and motto, the former always carrying a face in the centre. There is evidence that these arms were used in full i.e, with the seraphim and motto, prior to 1672.

The Holmains line remained active until John Carruthers 12th of Holmains, 8th Baron death (1809) when the Chiefship became dormant. The chiefs of Carruthers therefore can therefore trace their lineage back to 1320 and beyond.

Although there were those who could have laid claim to it, Carruthers had no chief for 210 years from the death of John 12th of Holmains. However, stimulated by the research and work of the Clan Carruthers Society – International, the Chiefship through the right to bear the Chiefly arms of our family, was petitioned for the first time with any Lyon in 2017 and was finally confirmed, after two court hearings and a full analysis by the Lyon Court of the evidence provided, in 2019.

The current Chief is the 4 x great grandson of John 12th of Holmains, 8th Baron. This makes Dr Peter Carruthers of Holmains, 19th in the line of Carruthers chiefs going back to Thomas 1st of Mouswald in 1320, over 700 years ago. The line can be seen in the genealogy chart above where Black on the chart shows all the Carruthers chiefs from 1320 to date, Blue on the Holmains line showing those prior to the Chiefship being passed to Holmains in 1548.

Dr. Carruthers’ parents, Charles and Molly were married in St Jude’s Church, South Kensington in London in 1951 and while working for a British tea company in India in 1954, their only child Simon Peter was born.  After returning home to the UK with his family as a child, Dr Carruthers known as Peter, spent his informative years in England where he was educated up to doctorate level.

Peter is an agricultural scientist with further qualifications in management and theology. The Chief’s grandfather was Col. Nigel L Carruthers, 2x great grandson of John the 12th who was a serving officer in the British Army in India and his great uncle, Nigel’s brother, was the world renowned explorer, Alexander Douglas Carruthers.

Our journey to have a Chief confirmed

Here is a simple synopsis of the journey to have our chief confirmed, alongside the route to Commander of no living member of the Chiefly line exists. 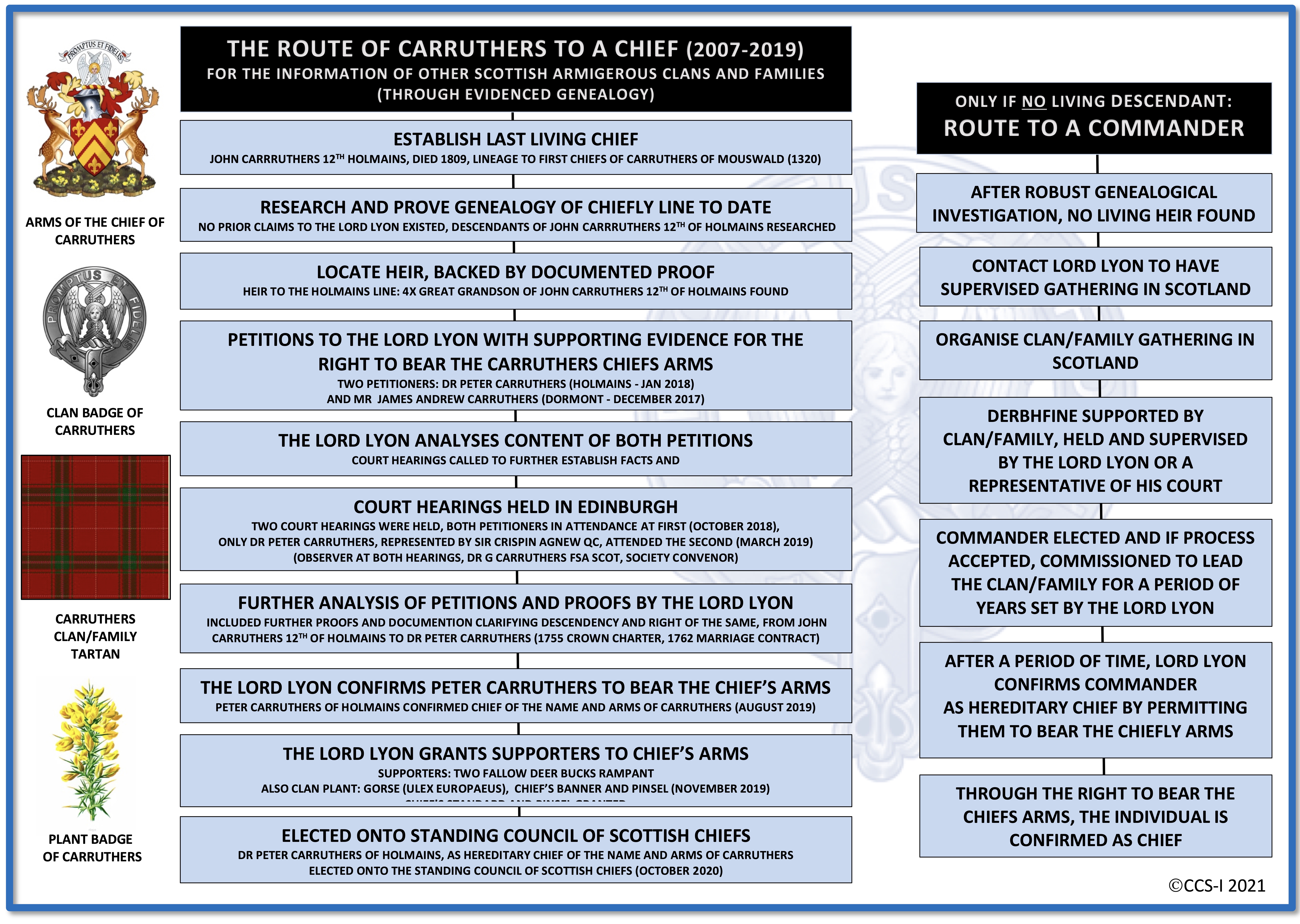 The Carruthers Crest Badge being the crest of the Chief’d arms, is over 350 years old and is part of Carruthers visual history.  It is blazoned/described as a Seraphim volant Proper (seraphim in flight, natural colours), and it sits encircled by a belt and buckle on which is inscribed to Chiefs Motto: Promptus et Fidelis. The Seraphim is the crest of the Chief’s Arms.

The belt and buckle indicate the clansman’s fealty to the Clan Chief. It is not the personal crest of the bearer.

The seraphim on the chief’s crest always follows the religious and heraldic depictions of the same, that being: six wings, the two uppermost and lowermost, crossed in saltire, the middle pair extended as in flight and in the centre sits an angelic face.

This depiction of the crest was continued by Major F J Carruthers of Dormont, when he matriculated the Dormont arms from the chiefly arms of Holmains in 1913. However his shield was differenced with chevronels and a gold border to depict a cadet line

Further Information on all other Carruthers armigers currently living, can be found here

Plant Badge: The Common Gorse (Ulex europeaus) is a large, robust, evergreen shrub, covered in needle-like leaves with distinctive and fragrant bright yellow flowers. It can reach 2.5 meters high, which is much larger that its cousins western gorse (Ulex galli) and dwarf gorse (Ulex minor).  Although Common Gorse blooms six months of the year, from January to June, the others will bloom July to November, therefore between the different species some gorse is almost always in flower, hence the old country phrase: “When gorse is out of blossom, kissing’s out of fashion”.

Our plant was chosen to reflect our family and its history as:

Prior to a Chief being confirmed in 2019 Carruthers was listed as a sept of Bruce from around the early to mid 1950’s by commercial tartan houses, and as such were permitted to use their tartan.

All the evidence shows however that until 2017, no tartan had actually ever been registered against the name of Carruthers.

The Carruthers tartan, as with all other Scottish clan/family tartans, is registered with the Scottish Register of Tartans, a Scottish Government agency based in Edinburgh and part of the National Records of Scotland. It carries the Registers code STR 11700, and is listed as the official clan/family tartan of Carruthers, recognised and registered as such by the Chief.

The meaning of the colours in our tartan is as follows: